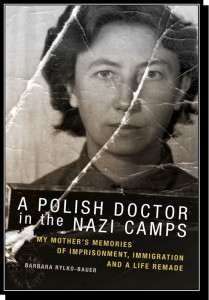 Anthropologist Barbara Rylko-Bauer has written an intimate ethnography that weaves personal family narrative with twentieth-century history to present a daughter’s account of her Polish Catholic mother’s World War II experiences as a prisoner-doctor in Jewish slave labor camps in Nazi Germany. Jadwiga Lenartowicz Rylko (known as Jadzia) was training to be a pediatrician in Poland when the war began. Arrested at the start of 1944, she endured three concentration camps, a 42-day death march, and the challenges of “surviving survival” – rebuilding a new life, first as a refugee doctor in Germany and later as an immigrant in the United States.

A Polish Doctor in the Nazi Camps is structured around Jadzia’s voice—using quotes from interviews that Rylko-Bauer conducted with her aging mother, but also incorporates the daughter’s own journey of rediscovering her family’s past. The resulting narrative about survival, displacement, memory, and resilience demonstrates how powerful historical forces impact individual lives, while augmenting our understanding of World War II, the Holocaust, and the struggle of immigrants in the aftermath of these tragic events.

The story is enriched with personal photographs and letters, archival documents, maps, and testimonies; it also includes historical notes and a bibliography for those readers who desire more indepth background information. Written in an accessible style, the book is appropriate for classroom use but will also appeal to general readers interested in biography, memoir, women’s history, the Holocaust as well as the Polish Catholic experience of World War II and the postwar period.

“‘You can’t imagine!’ This is Dr. Jadwiga [Jadzia] Lenartowicz Rylko’s frequent and emphatic punctuation in recounting fragments of her life to her daughter. But thanks to Barbara Rylko-Bauer’s forceful biography and memoir of her mother, we can imagine what it might be like to be the young physician, seized as a political prisoner and forced to work as a doctor in the sprawling network of concentration and labor camps and prisons that constituted … the other front line of World War II. … The backdrop to all the detail is, in Rylko-Bauer’s words, ‘the tremendous suffering of ordinary people’ caught up in deadly tumult. A Polish Doctor in the Nazi Camps shows us clearly that neither Rylko-Bauer nor her mother is in any way ordinary. Through their incandescent collaboration, the rough stone of memory is tumbled and polished, emerging as a fiery gem.”
Paul Farmer, “The Tremendous Suffering of Ordinary People”, the Boston Review, January 5, 2015.
Read full review: http://www.bostonreview.net/books-ideas/paul-farmer-barbara-rylko-bauer-polish-doctor-nazi-camps

“Every so often one comes across a book so engrossing that, as the truism goes, one can’t put it down. Typically, such books tend to be works of fiction—popular crime thrillers, espionage novels, or summertime beach reads. It’s nice, then, to find a work of nonfiction that takes on a subject matter as grim as the Nazi concentration camps and turns it into an utterly relatable story – like that of a Catholic Polish woman who survived World War II and lived to 100 years of age. [This book] is anthropologist Barbara Rylko-Bauer’s rendering of [her mother] Jadwiga Lenartowicz Rylko’s memories of life, both before and after World War II. … A Polish Doctor in the Nazi Camps is a gripping and compelling work of non-fiction that strikes a perfect balance between historical research and personal narrative, an “intimate ethnography” of one woman’s remarkable journey from one of the worst recorded abysses of human experience, retold with humility, pathos and empathy.”
Girija Sankar, newpages.com
Read the full review: http://www.newpages.com/bookreviews/2014-05-01/#Polish-Doctor-Nazi-Camps-by-Barbara-Rylko-Bauer

“Barbara Rylko-Bauer has written an extraordinary memoir that not only tells her mother’s story but places it in a well researched historical context. [It] is a rare and wonderful achievement, easily the best book I have ever read about a gentile … survivor. … Rylko-Bauer’s skill as a scholar is matched by her skill as a writer and her sensitivity as a daughter. … Beautifully edited and published by the University of Oklahoma Press, this is the extraordinary chronicle of one woman’s struggle to remake her life in America after enduring unspeakable hardship in Europe.”
Leonard Kniffel, former editor-in-chief, American Libraries — from his blog, “A Polish Son,” June 28, 2014.
Read full review: http://polishson.com/?p=2659

“Compelling. Riveting. Exquisite. Barbara Rylko-Bauer brings an anthropologist’s mind, eye, heart, and ear to the untold story of a young Polish physician ensnared as subject and accessory to the Nazi project of slave labor and mass murder. In no uncertain terms, A Polish Doctor in the Nazi Camps reaffirms the dignity of survival, resilience, and solidarity in the face of human suffering. The book sets a high bar for the new genre of intimate ethnography.”
Gelya Frank (University of Southern California), author of Venus on Wheels: Two Decades of Dialogue on Disability, Biography, and Being Female in America

“The subject of this riveting publication was 89 years old before her daughter … began the years-long interviewing process providing the biographic core of this book.”
Erika Bourguignon, co-editor of Exile: A Memoir of 1939 — excerpted from The Antioch Review, Summer 2014, vol. 72, no. 3, p. 603.

“Rylko-Bauer has done a superb job of teasing out the story from her reluctant informant and by using archival and bibliographic references where they are needed. … [Her] writing style is very accessible to any interested adult reader. It would make an excellent auxiliary reading for history and other social science college classes.”
Gretchen Schafft, author of From Racism to Genocide and Commemorating Hell: The Public Memory of Mittelbau-Dora — excerpted from Medical Anthropology Quarterly, Oct 23, 2014, online version.

“Rylko-Bauer is impressively sensitive to the complexities of the Polish memory of the war, as it often comes in conflict with the Jewish narratives of victimization. Her attempt to show the two memories as “intertwined” is an important alternative to the customary compartmentalization of these histories. The book contributes to biography/autobiography, memory studies, the history of World War II and its aftermath, Holocaust studies, immigrant studies [and] will be engaging for ‘general readers’ and of special interest for Polish immigrants in the United States.”
Dorota Glowacka (University of King’s College), author of Disappearing Traces and Imaginary Neighbors: Mediating Polish-Jewish Relations After the Holocaust

“… very well written. I felt like I was time travelling with your mother and was 10 feet in back of her, seeing and hearing what she experienced. I am sure the pure horror of what she saw, and the emotions she felt could never be totally described, but you did describe them well. Being a WWII history buff, I was impressed with the research you obviously did.”
Mike Van Rooy, Grand Rapids, MI