Conditions in Ravensbrück were terrible—prisoners were cold, hungry, sick, abused. After two months there, Jadzia was transported, along with several other prisoner-doctors, to another concentration camp, Gross-Rosen. From there they were dispersed to different subcamps, with Jadzia assigned to the Neusalz slave labor camp. She served as the prisoner-doctor to about 1000 Jewish women prisoners who worked under harsh conditions without pay for the German textile firm, Gruschwitz. In January 1945, as the Soviet army drew near, the Nazis closed the camp and began marching the women into Germany. The final destination of this 42-day death march, for those who survived, was another concentration camp, Flossenbürg. A week after her arrival, Jadzia was transported to the Jewish slave labor camp, Mehltheuer. The camp was liberated by U.S. troops on April 15, 1945. 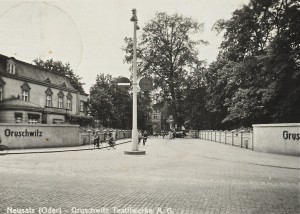 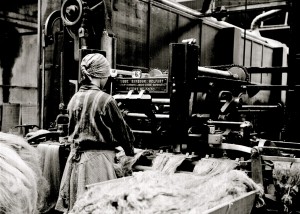 (188) Example of complex machinery and potentially dangerous conditions that women worked under in the Gruschwitz factory (Neusalz). For image credit, see below.